Estes was built on values, but it runs on trust. That’s why after more than 90 years in the freight transportation business, we’re still so dedicated to building strong relationships with the people we serve, and delivering exceptional experiences that keep them coming back:

At Estes, going the extra mile isn’t just what we do—it’s who we are.

Below are our vital statistics—including information about Estes’ people, fleet, facilities, and accolades.

It all began in 1931 when our founder, W.W. Estes bought a used Chevrolet truck to haul livestock to market for his neighbors in rural Virginia. Estes was looking for a way to support his family during The Great Depression but in time his business grew. Soon he was transporting not only livestock, but farm supplies and other goods to nearby farms, small towns, and large cities. Over the next five years he hired his first drivers, opened an office in Chase City, Virginia, and officially named the company Estes Express Lines.

In the last nine decades, this one-man trucking operation has grown into the largest privately held freight carrier in the nation. Today, Estes has more than 22,000 employees, a fleet of more than 8,500 tractors and 34,000 trailers, and a network of 270+ terminals, with coverage in all 50 states, Canada, Mexico, Puerto Rico, and the Caribbean. And our company is debt-free, financially-stable, and has won several awards for safety, reliability, and exceptional customer service.

If W.W. could see Estes today, he would certainly be amazed to witness how much his business has grown. But we think he would be even more pleased to know that his company’s growth was driven by the same values of hard work, honesty, and commitment that served as his foundation back in 1931. Though a lot has changed in the shipping industry (and the world) over the last 90 years, Estes remains committed to delivering responsive freight solutions so our customers can focus on what matters most.

At Estes, we’re proud to have a team of more than 22,000 fiercely dedicated employees who always go the extra mile to take care of the people we serve. We are committed to delivering responsive freight solutions so our customers can focus on what matters most—and at the heart of that mission are our Estes core values:

FAMILY-INSPIRED CULTURE – Our people are like family. We support and inspire each other every day. We collaborate and roll up our sleeves to pitch in whenever needed. Estes is a third- and fourth-generation family owned and run enterprise, so our focus is on the long-term.

STABILITY & EXPERIENCE – We have nine decades of experience characterized by continual growth and development of end-to-end solutions. That experience — along with a conservative fiscal management policy — means that we have the resources, equipment, and technology that will provide customers with continual improvements.

SAFETY – We are resolute in the quest to keep people safe — both our associates and the public.

INNOVATION – Our culture embraces flexibility and the development of new ideas and technology for improving the breadth of services we offer every day.

INTEGRITY & TRUST – Our unwavering commitment to honesty, fairness, and doing the right thing is one of the main reasons we’re still in business after almost nine decades.

EMPOWERMENT – We equip associates to provide the best service to our customers and celebrate the ability to overcome obstacles.

COURAGE & DETERMINATION – We are passionate about inspiring smart thinking, a make-it-happen mentality, and a drive to excel in order to create better outcomes.

Visit our Careers site to see if you might be a good fit for our team!

As the nation’s fifth largest LTL shipper, Estes is committed to providing top-of-the-line transportation solutions while still remaining a good steward of the Earth. That’s why we:

At Estes, we’ve got our eyes on the road and the environment. Explore the following tabs to discover the many ways we’re investing in tomorrow through our commitment to eco-sustainability.

At Estes, we’re committed to doing right by our customers, and the planet. That’s why we’re excited to be the first LTL carrier to participate in the 2022 inaugural pilot of Remora, a new carbon capture technology that vastly reduces the amount of CO2 a semi-truck releases into the earth’s atmosphere.

Remora was developed out of research funded by the EPA to:

Estes is one of only six companies to participate in the inaugural year of Remora pilots and will be retrofitting ten vehicles with this groundbreaking new carbon capture technology.

In 2004, Estes demonstrated our commitment to eco-sustainability by becoming one of the first trucking companies to join the Environmental Protection Agency’s (EPA) SmartWay Transport Partnership.

This innovative collaboration between the freight industry and government improves energy efficiency and security while reducing air pollution and greenhouse gas emissions. SmartWay gives carriers the tools to verify the benefits of fuel-saving vehicles and equipment, and at Estes, we use SmartWay-approved vendors for purchases of new tractors, trailers, and tires.

Since its inception, SmartWay has helped its partners avoid emitting 150 million tons of air pollution into the environment.

Whether in our shops, terminals, or in our trucks, we conserve natural resources through:

We follow environmentally responsible procedures to keep harmful pollutants out of the air and groundwater in the communities we serve.

We make responsible decisions about fuel usage. From route-planning technology to ensuring we carry freight as efficiently as possible, we work hard to minimize our trucks’ fuel consumption and carbon dioxide emissions.

At Estes, we believe in giving back to the communities we serve. That’s why our company and its employees have devoted countless hours and resources over the years to causes such as:

SureMove provides a reliable, lower-cost option for do-it-yourself household moves. SureMove drops off and moves the trailer. You load and unload within three-day windows—and save a bundle on moving costs. Visit the website to learn more or get a quote today. 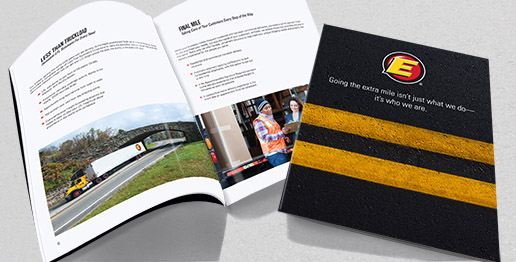 We go the extra mile to deliver freight solutions you can
count on.